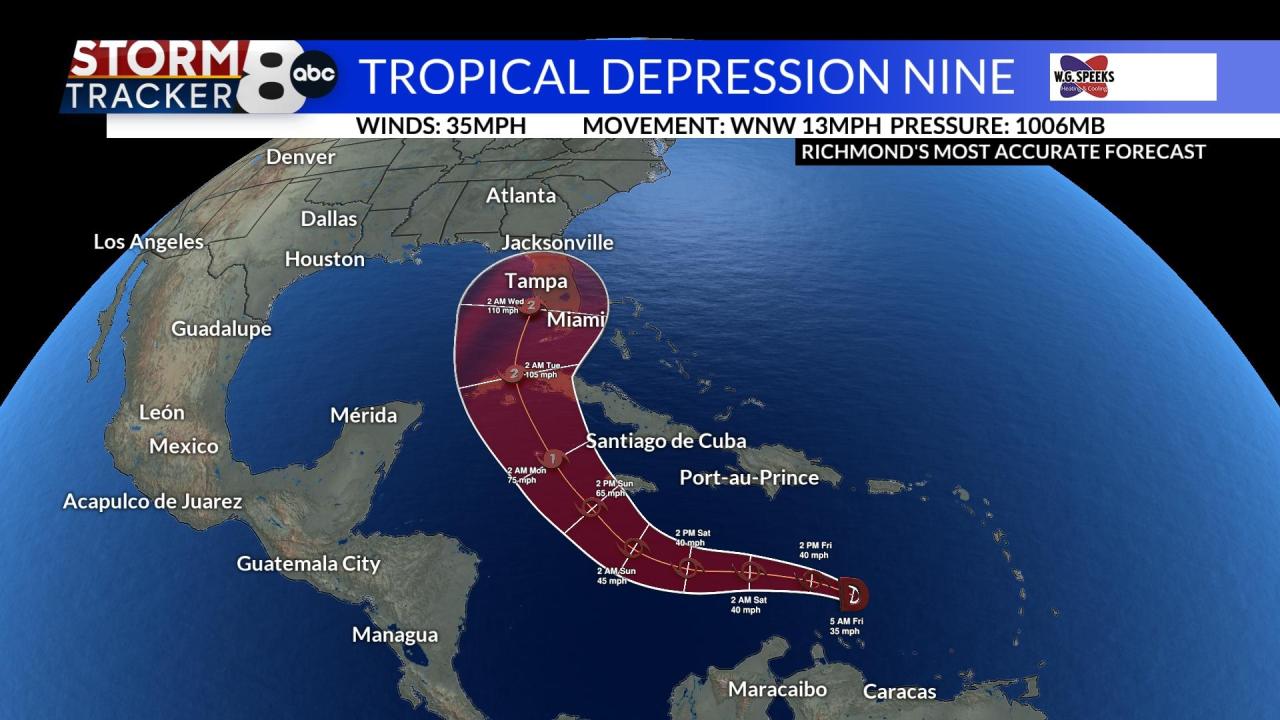 When is the next hurricane likely to hit the East Coast?

RICHMOND, Va. (WRIC) – Tropical Depression #9 (TD #9) formed early this morning. It was an area of ​​weather that we had seen north of South America that we thought would develop. TD #9 is one to watch very closely over the weekend and into next week.

The storm will slide over very warm water in the Caribbean, which will help it strengthen. As we move through the next couple of days, TD #9 will move into an area where there will be fewer winds that can tear the system apart, so the storm will become more organized and take the form of a classic tropical cyclone.

We expect TD #9 to strengthen into Tropical Storm Hermina over the next 12 to 24 hours and strengthen to Hurricane Hermina by the end of the weekend.

TD #9’s initial track strengthens to a Category 2 hurricane moving over the western side of Cuba by Tuesday morning before approaching western Florida on Wednesday.

Chesterfield County residents are preparing to find their own recycling service

It is very important to note that this initial track from the National Hurricane Center is just the beginning of the picture of what TD #9 can do. As the system develops, we will see fluctuations in the intensity of the system, which could slow the timing of the storm, and we will also see a lot of variation in the east-west track. But don’t assume that this single path is the last path, remember that the track is a guide that allows those who may be in its path to start thinking about preparing for the storm.

The Virginia State Fair kicks off a 10-day festival

It’s smart for us in Central Virginia to keep an eye on this storm, especially with the forecast we’ll see early next week. There is a chance that later next week, Friday or Saturday, we could see some tropical moisture and possibly bring us some much needed rain. However, nothing is set in stone. Much of our forecast will depend on the speed and development of TD #9 as it becomes Hermine, as well as how strong an area of ​​high pressure extending from the Great Lakes to the Mid-Atlantic is, which could block or deflect Hermine out to sea south of us.