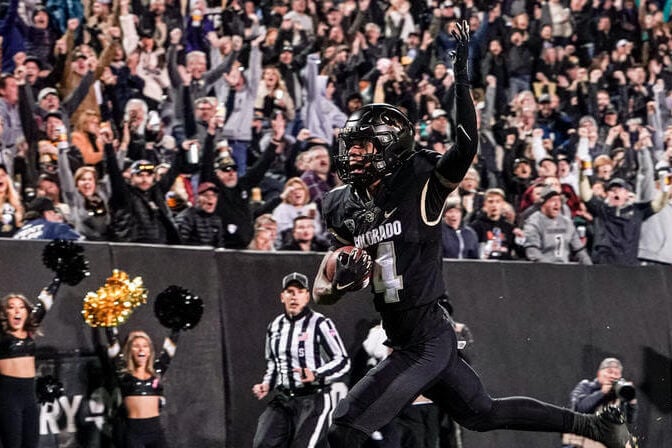 It’s been a long season for Colorado.

The Buffaloes fell to 1-7 after Saturday’s 42-34 loss to Arizona State.

But at least there’s Jordyn Tyson to cheer for.

The former three-star recruit from Allen, Texas, led all true freshmen in receiving yards last week with five catches for 115 yards and a touchdown. He also ran back a punt 88 yards for a score.

.@tyson_jordyn WITH AN 88-YARD PUNT RETURN 🤯

“I think Jordyn Tyson’s a superstar,” interim coach Mike Sanford said. “I think he’s going to be a superstar in this conference for a while. I think he’s gonna have a tremendous career in the game of football. What I love about Jordyn is I think he has kind of embodied a little bit of the culture that we’ve brought forth — just the juice, the joy, the smile that he has on his face at practice. He’s an infectious guy.

“I think he is turning into a sure-handed player, an explosive playmaker for us and, frankly, we need it. It’s been a great emergence for us offensively.”

Tyson’s 333 yards receiving and three touchdown catches lead the Buffaloes, who have the 126th-ranked scoring offense (16.3 points per game).

Tyson caught 80 passes for 1,518 yards and 12 touchdowns as a senior at Allen, a state power, but Colorado was his only Power 5 offer. The other suitors: Colorado State, New Mexico, Texas State, Tulsa, Campbell, Incarnate Word and Sam Houston.

“There is definitely a chip on my shoulder, knowing that I didn’t have the offers that I thought I should have,” Tyson told BuffStampede.com in August. “But it pushed me to become a better player. I knew I could compete with anybody, even if you are a four- or five-star.”

Here are some other true freshman standouts from Week 9:

Texas A&M’s Connor Weigman showed Aggies fans what the future might bring — and what might’ve been this season had Jimbo Fisher gone to him earlier — in Saturday’s 31-28 loss to Ole Miss. Weigman completed 63.6 percent of his passes for 338 yards, four touchdowns and no interceptions to easily post the best QB rating for an Aggies passer since the season-opening win against Sam Houston State.

“You can ruin a guy a lot quicker than you can make a guy when they’re a freshman like that,” Fisher said of why Weigman wasn’t given an opportunity to start earlier. “Everybody wants to throw them in there. You’ve seen in the NFL when they throw rookies in there, there are some teams that aren’t doing as well and things. But I love him. I knew he’s going to be a good player. I said it all along. Hopefully, it’s the right timing for him to play and he keeps playing like he’s playing. I love him to death.”

Weigman made Ole Miss pay for bringing the blitz — connecting on 9 of 11 attempts for 133 yards and two touchdowns when the Rebels brought an extra pass rusher. When pressure got to Weigman, he was 4 of 10 for 68 yards and a touchdown and was sacked twice. Texas A&M ran play-action on only four of his 47 dropbacks.

NC State’s MJ Morris didn’t start in the Wolfpack’s 22-21 come-from-behind win against Virginia Tech, but it’s hard to imagine he won’t be starting going forward. He completed 20 of 29 passes for 265 yards and three touchdowns in relief of Jack Chambers. NC State quarterbacks had thrown only two touchdowns combined in their three previous games. Morris was 7 of 10 for 65 yards and two touchdowns against the blitz.

“There’s some promise for the future at quarterback, it’s pretty exciting with what he has done in really only a week and a half of reps,” NC State coach Dave Doeren said postgame.

Another true freshman set to move into the starting role is SMU’s Kevin Jennings. He came off the bench in the second half and helped lead the Mustangs to a 45-34 win at Tulsa, completing 8 of 11 pass attempts for 91 yards and a touchdown after Preston Stone went down.

Southern Miss’ Zach Wilcke improved to 5-2 as a starter after a 39-24 win against Louisiana. He was 8 of 17 for 137 yards and two touchdowns with an interception.

New Mexico State’s Gavin Frakes improved to 3-1 as a starter with a 23-13 win at UMass. He was 7 of 13 for a season-low 29 yards passing and ran for 28 yards on a day the Aggies turned to junior Diego Pavia to save the day. Pavia threw for 194 yards and two touchdowns off the bench.

Temple’s E.J. Warner fell to 1-5 as a starting quarterback but threw for a season-high 276 yards and a touchdown (with two interceptions) in a 27-20 loss to Navy. He was sacked three times.

Louisiana Tech’s Landry Lyddy lost 42-34 in double overtime in his first start. He finished 28 of 40 for 256 yards with no touchdown passes or interceptions. He did run for a touchdown.

Georgia Tech’s Zach Pyron was 18 of 28 for 198 yards and a touchdown off the bench in his first action of the season. He was sacked three times.

Ole Miss’ Quinshon Judkins became the first true freshman to crack the 1,000-yard mark when he ran for a season-high 205 yards and a touchdown in a 31-28 win against Texas A&M.

Judkins forced 13 missed tackles, according to Pro Football Focus, and averaged 4.25 yards after contact on 34 carries.

Baylor’s Richard Reese, meanwhile, ran for three touchdowns and 148 yards on 36 carries in a 45-17 win at Texas Tech. It’s the third 100-yard rushing performance of the season for Reese.

West Virginia’s CJ Donaldson had his fourth 100-yard rushing performance in a 41-31 loss to TCU. He finished with 104 yards and two touchdowns on 19 carries but sustained a lower leg injury in the second half. Coach Neal Brown said he isn’t optimistic.

Texas A&M’s Evan Stewart took the season lead for catches away from Vanderbilt’s Jaylen McGowan with six catches for 88 yards and a touchdown in a loss to Ole Miss. He was the only true freshman to catch more than five passes for the week.

Stanford edge rusher David Bailey was one of four true freshmen to record sacks. Bailey had nine tackles, a sack, a forced fumble and five quarterback pressures in a 38-13 loss to UCLA. His 20 pressures this season are second only to the 22 by Illinois’ Gabe Jacas.

Miami edge rusher Nyjalik Kelly picked up his third sack of the season in a 14-12 win against Virginia. Kelly ranks fourth in PFF’s pass-rushing productivity ratings (9.6) among true freshmen to play at least 50 pass-rushing snaps.

Georgia defensive lineman Mykel Williams picked up his second sack of the season and had three tackles and three quarterback pressures in a 42-20 win against Florida.

Penn State linebacker Abdul Carter had four tackles, a sack and three quarterback pressures in a 44-31 loss to Ohio State.

FAU linebacker Jaylen Wester led all true freshman linebackers this week with 11 tackles in a 24-17 win against UAB.

There were no interceptions among true freshmen, but Virginia Tech cornerback Mansoor Delane did force a fumble in a 22-21 loss to NC State. Monsoor also had 10 tackles, a sack and two pass breakups in his first start.

Virginia Tech True Freshman CB Mansoor Delane has a lot of potential, he gets the PBU here. pic.twitter.com/0mimEzDwq1

Boston College cornerback Amari Jackson had his best performance in a 13-3 loss to UConn, his third start. Jackson was targeted four times in pass coverage and allowed only two catches for 11 yards and had two pass breakups. Jackson and Delane were the true freshman defensive backs with more than one pass breakup.

Georgia Tech safety Clayton Powell-Lee led the week in tackling with 14 in a 41-16 loss to Florida State.

FAU’s Riley Thompson booted the longest punt of the season by a true freshman — a 71-yarder — in a 24-17 win against UAB. Thompson, a native Australian, posted the week’s top net average (50.9) with five punts pinning UAB inside the 20.

Colorado’s Tyson had the only punt or kick return for a score.