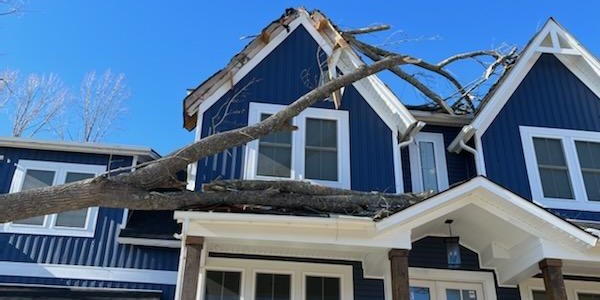 Chesterfield County, Virginia (WRIC) – Strong winds are blowing through the Richmond area at a constant speed of up to 25 miles per hour, gusts exceeding 35 miles per houra Chesterfield resident is dealing with damage to his home after he was hit by a fallen tree.

Eric Eckard was home with his wife and two sons on Saturday afternoon when the wind, strong enough to be heard from inside, knocked down a tree in a nearby yard. According to Eckard, the impact shook the house, and the tree rolled after it fell on the roof, making it sound as if it had hit the house several times.

Eckard says a tree crashed near the place where his two sons dozed off, one of them all overslept.

“Fortunately, everyone is safe. It could have been much worse, ”Eckard said.

Eckard believes the tree was already dead when it was felled, and when his car was damaged by a branch that fell from it a month ago, he said he asked the builders of a nearby house to cut it down.

According to StormTracker meteorologist David Williams, the dry cold front that passed through the Richmond area has caused a significant increase in wind speed, which is expected to subside tonight.

“The wind should calm down tonight after 6pm and we can expect much calmer conditions,” Williams said. “Not just for tonight, but for the rest of the weekend.”