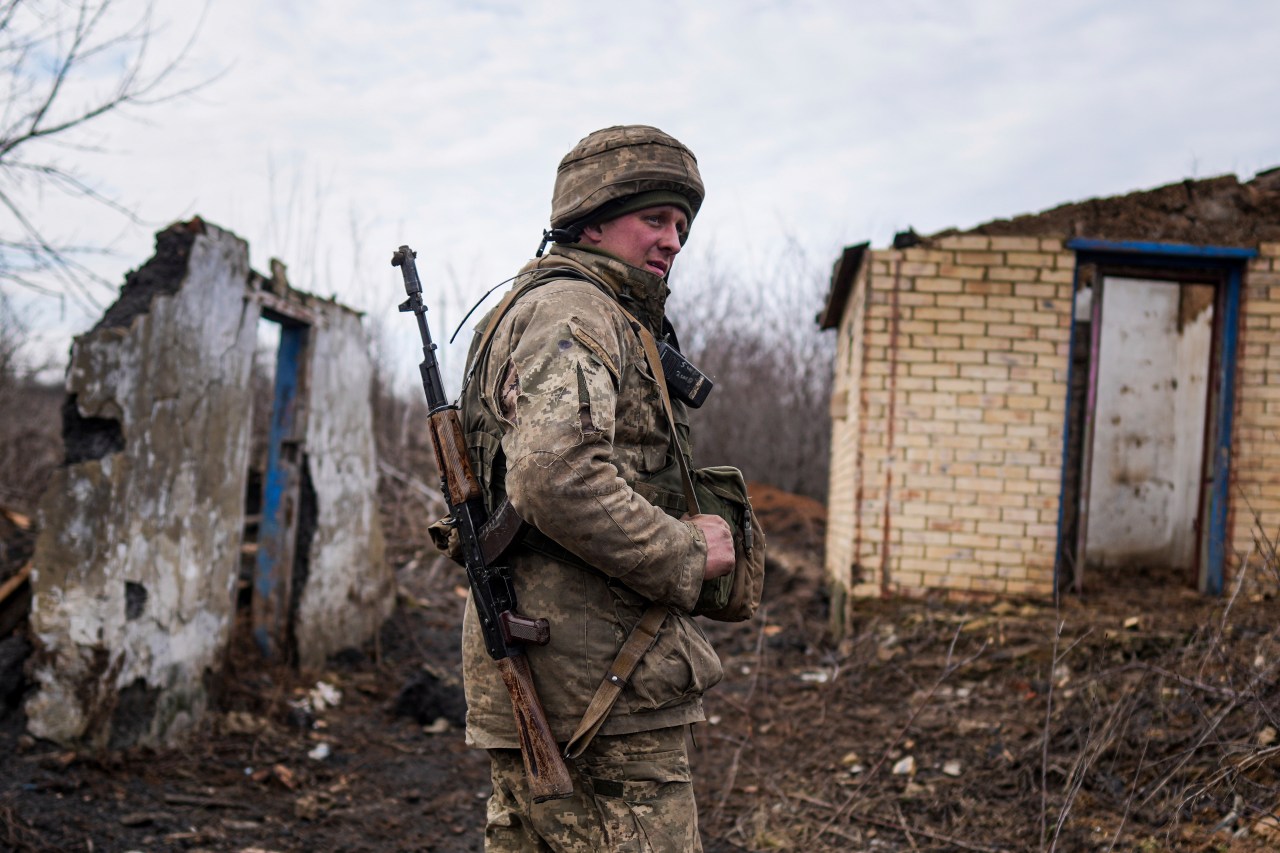 Russian Putin has announced a military operation in Ukraine

MOSCOW (AP) – Russian President Vladimir Putin on Thursday announced a military operation in Ukraine and warned other countries that any attempt to interfere in Russia’s actions would lead to “consequences they have never seen.”

He said the attack was necessary to protect civilians in eastern Ukraine – a statement the U.S. predicted he would falsely make to justify the invasion.

In a televised address, Putin accused the United States and its allies of ignoring Russia’s demand to prevent Ukraine’s accession to NATO and to offer Moscow security guarantees. He said that Russia’s goal was not to occupy Ukraine.

US President Joe Biden condemned the “unprovoked and unjustified” attack on Ukraine and said the world would “bring Russia to justice.”

While Putin was speaking, big explosions were heard in Kyiv, Kharkiv and other parts of Ukraine.

A full-scale Russian invasion could lead to mass casualties and overthrow Ukraine’s democratically elected government. And the effects of the conflict and the resulting sanctions against Russia could affect the world, affect energy supplies to Europe, shake global financial markets and threaten the balance on the continent after the Cold War.

He said that the Russian military operation was aimed at “demilitarization” of Ukraine. Putin called on the Ukrainian military to “lay down its arms immediately and go home.”

Why does the United States care so much about Ukraine? Experts break the conflict with Russia

Putin announced the military operation after the Kremlin said insurgents in eastern Ukraine had asked Russia for military assistance to help repel Ukrainian “aggression.” This statement immediately raised fears that Moscow was offering a basis for war, as the West had warned.

The Ukrainian president soon rejected Moscow’s claims that his country posed a threat to Russia, and said the Russian invasion would cost tens of thousands of lives.

“The people of Ukraine and the government of Ukraine want peace,” said President Volodymyr Zelensky in an emotional night address, speaking in Russian in a direct address to Russian citizens. “But if we are attacked, if we face an attempt to take away our country, our freedom, our lives and the lives of our children, we will defend ourselves. If you attack us, you will see our faces, not our backs. ”

Zelensky said he had asked to arrange a call with Putin late Wednesday, but the Kremlin did not respond.

Clearly referring to Putin’s move to authorize the deployment of Russian troops to “maintain peace” in eastern Ukraine, Zelensky warned that “this move could mark the beginning of a major war on the European continent.”

“Any provocation, any spark can cause a fire that will destroy everything,” he said.

He denied the statements of Russian propaganda, saying that “you are told that this fire will bring freedom to the people of Ukraine, but the Ukrainian people are free.”

Concerns over Russia’s imminent attack on a neighbor have risen after Putin on Monday recognized the independence of separatist regions, approved the deployment of troops in rebel territory and received parliamentary permission to use military force outside the country. The West responded with sanctions.

White House spokeswoman Jen Psaki said the separatists’ request for help from Russia was an example of a “false flag” operation that the United States and its allies expected Moscow to use as a claim to war.

“Therefore, we will continue to call what we consider operations under a false flag, or efforts to spread misinformation about the actual status of the place,” she said.

Earlier in the day, Ukrainian lawmakers approved a decree imposing a nationwide state of emergency for 30 days, starting Thursday. The measure allows the authorities to declare curfews and other restrictions on movement, block rallies and ban political parties and organizations “in the interests of national security and public order.”

This action reflects the growing concern of the Ukrainian authorities after several weeks of trying to project calm. The Foreign Ministry recommended not to go to Russia and advised all Ukrainians who are there to leave immediately.

“For a long time we refrained from imposing a state of emergency … but today the situation has become more complicated,” – said in parliament, Chairman of the National Security and Defense Council of Ukraine Alexei Danilov, emphasizing that the main threat is Moscow’s efforts to destabilize Ukraine.

The latest images published by the satellite imagery company Maxar show that Russian troops and military equipment are within 10 miles of the Ukrainian border and less than 50 miles from Ukraine’s second largest city, Kharkiv.

On Thursday morning, the airspace over all of Ukraine was closed to civil air traffic, the statement said. A commercial flight tracking website revealed that the Israeli El Al Boeing 787, which was flying from Tel Aviv to Toronto, suddenly left Ukrainian airspace before flying over Romania, Hungary, Slovakia and Poland. The only other aircraft tracked over Ukraine was the U.S. RQ-4B Global Hawk reconnaissance drone, which began flying west on Thursday after Russia imposed restrictions on flights over Ukrainian territory.

Officials have long said they expect cyberattacks to precede and accompany any Russian military invasion, and analysts say the incidents are linked to a nearly 20-year-old Russian textbook on wedding cyber operations with real-world aggression.

In another case, Russia evacuated its embassy in Kiev; Ukraine has recalled its ambassador to Russia and considered severing all diplomatic ties with Moscow, and dozens of countries have pushed Russian oligarchs and banks even further out of international markets.

“As I have made clear, we will not hesitate to take further steps if Russia continues to escalate,” Biden said in a statement.

On Tuesday, Germany said it was suspending the project indefinitely after Biden accused Putin of launching “the beginning of Russia’s invasion of Ukraine” by sending troops into separatist regions. The pipeline is complete but not yet operational.

Putin said on Tuesday that he had not yet sent Russian troops to the rebel regions, contrary to Western statements, and Donetsk insurgent leader Denis Pushilin insisted on Wednesday that there were no Russian troops in the region, even though he was a local council member. stated that they had moved the day before.

The threat of war already exists destroyed the economy of Ukraine and raised up the ghost of mass casualties, energy shortages across Europe and global economic chaos.

EU sanctions against Russia came into force, targeting several campaigns along with 351 Russian lawmakers who voted in favor of the initiative calling on Putin to recognize the rebel regions and 27 high-ranking government officials, business leaders and senior military officials.

Russia’s foreign ministry has waived the sanctions, saying “Russia has proven that with all the costs of sanctions, it can minimize the damage.”

In eastern Ukraine, one Ukrainian serviceman was killed and six others were injured in insurgent shelling, the Ukrainian military said on Wednesday. Separatist officials reported several explosions on their territory at night, killing three civilians.

Faced with a barrage of criticism at the 193-member UN General Assembly, Russia’s ambassador to the UN Vasily Nebenzya warned Ukraine that Russia would monitor the ceasefire in the east and stressed that “no one intends to go softly, gently with any violators.” .

“Kiev’s” new military adventure “can be very costly for the whole of Ukraine,” he warned ominously.

After weeks of rising tensions, Putin’s moves have risen sharply this week. He is recognized the independence of the separatist regionsthe move, he said, extended even to much of the territory now under Ukrainian rule, and parliament gave him the power to use military force outside the country.

Putin set out three conditions he said could put an end to the confrontation, urging Kyiv to abandon its NATO bid, partially demilitarize and recognize Russia’s sovereignty over Crimea, the Black Sea peninsula that Moscow annexed from Ukraine in 2014. Ukraine has long refused such demands.