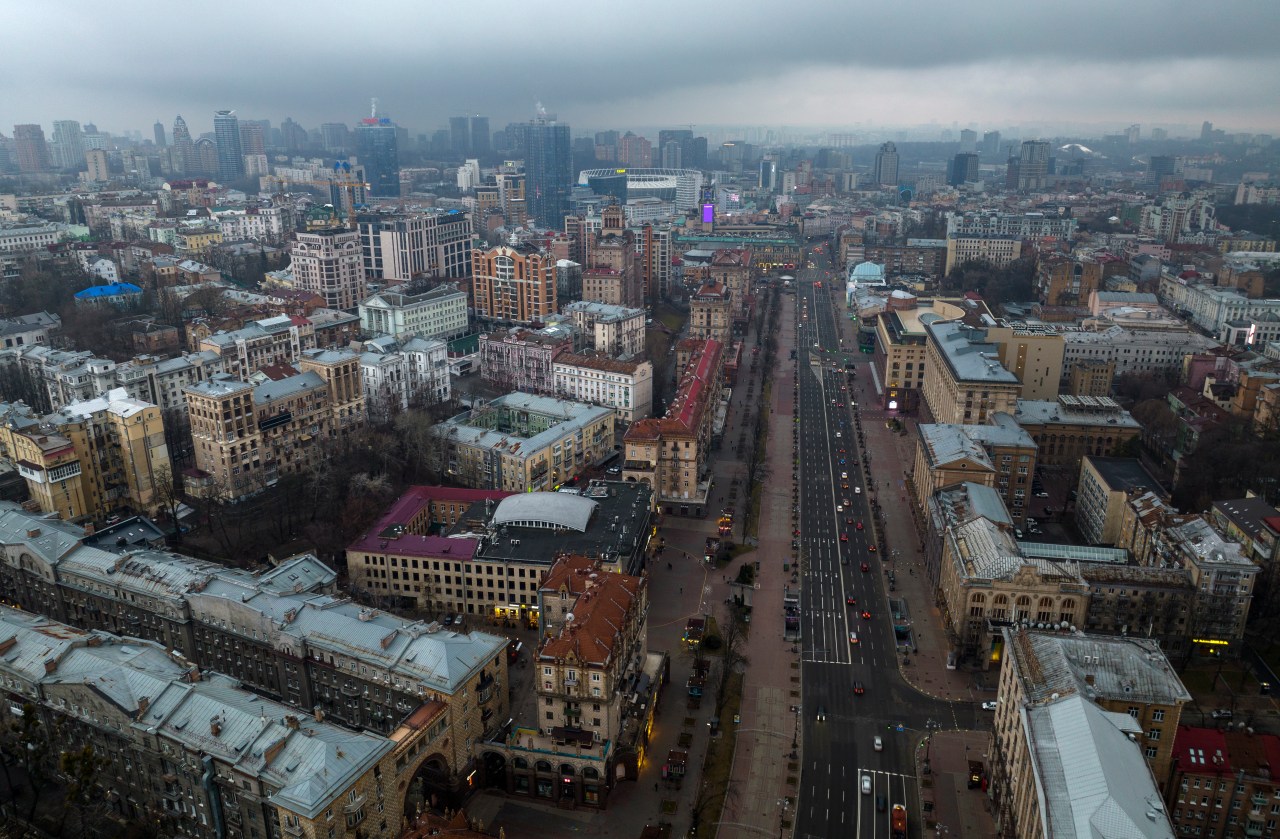 Russia-Ukraine: what you need to know, because Russia is attacking Ukraine

WARSAW, Poland (AP) – On Thursday, Russian troops launched a large-scale offensive against Ukraine from three sides, an attack that began with explosions before dawn in the capital Kiev and other cities.

The Ukrainian leadership has said that at least 40 people have been killed so far in a “full-scale war” targeting the country from the east, north and south.

In a televised address since the attack began, Russian President Vladimir Putin has warned other countries that any attempt to intervene “will lead to consequences you have never seen in history.”

Ukrainians began to flee some cities, and the Russian military claimed that in a few hours dismantled all air defenses and air bases in Ukraine.

World leaders have condemned the beginning of an invasion that could lead to mass casualties, overthrow Ukraine’s democratically elected government and threaten the balance after the Cold War on the continent.

US President Joe Biden said the world would “bring Russia to justice”. NATO Secretary General Jens Stoltenberg has condemned Russia’s actions as a violation of international law and a threat to European security.

The Ministry of Foreign Affairs of Ukraine stated that Russia’s intention was to destroy the state of Ukraine, a democracy that is oriented towards the West, which intends to withdraw from Moscow’s orbit.

Here’s what you need to know about the conflict over Ukraine and the security crisis in Eastern Europe:

Putin said the military operation was necessary to protect civilians in eastern Ukraine – a statement the United States predicted he would falsely make to justify the invasion.

Putin has accused the United States and its allies of ignoring Russia’s demands to block Ukraine from joining NATO and offer Moscow security guarantees.

Putin has stated that Russia does not intend to occupy Ukraine, but will “demilitarize” it. Shortly after his return, explosions erupted in Kyiv, Kharkiv, and Odessa. Russia has said it is attacking military facilities.

He called on the Ukrainian military to “immediately lay down their arms and go home.”

The Border Guard Service of Ukraine stated that the Russian military attacked from neighboring Belarus, firing a barrage of artillery. The agency reported that Ukrainian border guards opened fire in response, adding that there were no direct reports of casualties. Russian servicemen were in Belarus for military exercises.

Biden, Stoltenberg and other world leaders were quick to condemn Russia’s attack as unprovoked and unjustified.

Putin “has chosen a deliberate war that will bring catastrophic loss of life and human suffering,” Biden said in a statement.

The Prime Minister of the United Kingdom Boris Johnson said that the Western allies would not stay aside until Russia attacks Ukraine, and told Zelensky in the morning call that he was shocked by the events.

Japanese Prime Minister Fumio Kishida said: “This Russian invasion will jeopardize the basic principle of the international order, which prohibits the unilateral action of force in an attempt to change the status quo.”

THE PRESIDENT OF UKRAINE INVITES TO REST

When the first explosions were heard, residents of the capital of Ukraine, Kyiv, were heard shouting in the streets. But some normalcy quickly returned when cars drove through the streets in the morning.

President Vladimir Zelensky made a video statement declaring martial law. He told Ukrainians that the United States was gathering international support to respond to Russia. He urged residents to remain calm and stay at home.

World stock markets have plummeted, and oil prices have risen by almost $ 6 a barrel since Putin launched Russian military action in Ukraine.

Market benchmarks fell in Europe and Asia, and US futures fell sharply. Brent crude jumped to $ 100 a barrel on Thursday due to concerns about a possible disruption in supplies from Russia.

The ruble’s exchange rate against the US dollar fell by 7.5% to more than $ 87. Earlier, the benchmark Wall Street S&P 500 fell 1.8% to an eight-month low after the Kremlin said rebels in eastern Ukraine had asked for military assistance.

China’s customs agency on Thursday approved wheat imports from all regions of Russia, which could help reduce the effects of possible Western sanctions.

The governments of the two countries announced on February 8 an agreement with China on the import of Russian wheat and barley after Putin became the most prominent foreign guest to participate in the Winter Olympics in Beijing.

China’s populous market is a growth zone for other agricultural suppliers, but Beijing has so far banned imports from major Russian wheat-growing areas due to concerns about possible fungi and other infections.

Russia is one of the largest producers of wheat, but its exports will be vulnerable if its foreign markets block supplies in response to its attack on Ukraine.

An announcement Thursday said Russia would “take all measures” to prevent wheatgrass infestation and suspend exports to China if it is found.

At an emergency meeting of the UN Security Council convened by Ukraine on the eve of Putin’s statement, UN Secretary-General Antonio Guterres told Putin: “Stop your troops from attacking Ukraine. Give the world a chance. Too many people have already died. “

Guterres later asked Putin to “return your troops to Russia in the name of humanity.”

WHEN WILL THE EVENT INTRODUCE MORE SANCTIONS?

Ukraine’s forces do not coincide with Moscow’s military power, so Kiev hopes that other countries will strike a heavy blow at Russia – sanctions.

Biden waived sanctions last year when the project was nearly completed, in exchange for an agreement with Germany to take action against Russia if it uses gas as a weapon or attacks Ukraine. On Tuesday, Germany said it was suspending the pipeline indefinitely.

Biden said additional sanctions would be announced on Thursday.

Meanwhile, the European Union has planned “the strongest and toughest package” to be considered at Thursday’s summit, according to EU foreign policy chief Josep Barrel.

“A major nuclear power has attacked a neighboring country and threatens to kill any other state that may come to the rescue,” Barel said.

“This is not only the biggest violation of international law, it is a violation of the basic principles of human coexistence. It costs many lives with unknown consequences ahead. The European Union will respond in the most decisive way. “

WHAT SANCTIONS HAVE BEEN CONSIDERED IN US, WHEN RUSSIA IS ATTENTION?

The Biden administration has made it clear that it has tough financial sanctions in place in the event of such a Russian invasion.

The United States has not specified what action it will take now, although administration officials have made it clear that full sanctions against major Russian banks are a likely option. So are export restrictions, which deny Russia high-tech U.S. for its industry and military.

Another tough measure under consideration would effectively rid Russia of much of the global financial system.

HOW IS THE UKRAINIAN ECONOMY CONTAINING?

Most likely, the threat of war eroded the economy in Ukraine, not Russia.

Embassies and international missions in Kyiv closed one after another. Flight after flight was canceled when insurance companies refused to cover planes arriving in Ukraine. Hundreds of millions of dollars of investment have dried up in a matter of weeks.

Shrinking Ukraine’s economy is a key destabilizing tactic in what the government describes as a “hybrid war” designed to eat the country from within.

Economic problems include restaurants that dare not keep food on hand for more than a few days, suspended plans to set up a hydrogen plant that could help wean Europe off Russian gas, and uncertain conditions for shipping in the Black Sea, where container vessels need to be careful. bypassed Russian warships.

The websites of Ukraine’s defense, foreign and interior ministries were unavailable or very slow to load on Thursday morning after a punitive wave of distributed denial-of-service attacks that Russia inflicted on its neighbor.

In addition to DDoS attacks on Wednesday, cybersecurity researchers said unknown assailants infected hundreds of computers with destructive malware, some in neighboring Latvia and Lithuania.

Officials have long expected that cyberattacks would precede and accompany any Russian military invasion.

HOW DID THE CONFLICT BE SEEN IN RUSSIA?

In preparation for the attack, Russian state media reported that Moscow was coming to the aid of war-torn areas of eastern Ukraine, where residents were suffering from Ukrainian aggression.

“You paid with blood for these eight years of suffering and expectations,” host Olga Skabeeva said during a popular political talk show on Tuesday morning. “Russia will now defend the Donbass.”

The first channel received a more festive tone, its correspondent in Donetsk said that locals “say this is the best news of the last years of the war.”

“Now they have confidence in the future and that the long war will finally end,” she said.

Another question is whether ordinary Russians bought it.

Associated Press authors around the world have contributed to this report.