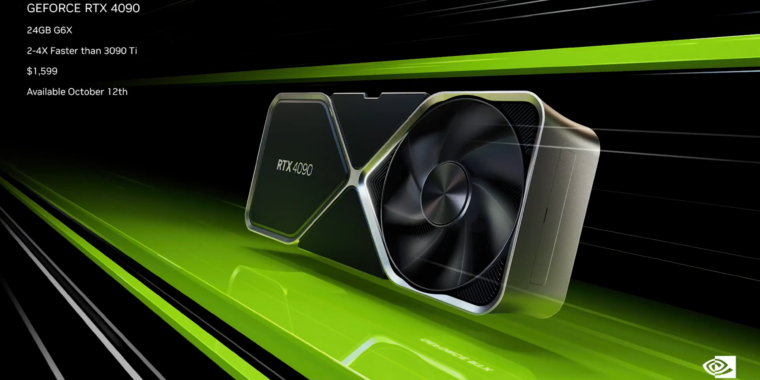 After weeks of teasing, Nvidia’s latest PC graphics cards have arrived, the RTX 4000 “Ada Lovelace” generation of GPUs. On Tuesday, Nvidia CEO Jensen Huang unveiled two new models: RTX 4090which will start at a whopping $1,599, and RTX 4080which will be launched in two configurations.

The more expensive card, which is scheduled to launch on October 12, is in the same high-end category as Nvidia’s 2020 megaton RTX 3090 (previously labeled by the company as a “Titan” product). Increasing the physical size of the 4090 will require three slots on your PC build of choice. The specs point to a top-end GPU, with 16,384 CUDA cores (compared to the 3090’s 10,496 CUDA cores) and a clock speed of 2.52GHz (compared to the 3090’s 1.695GHz). Despite the improvements, the card still runs within the same 450W power range as the 3090. Its RAM allocation will remain at 24GB of GDDR6X memory.

This jump in performance is due in part to Nvidia’s switch to TSMC’s “4N” process, which is a new generation of 5nm chips that offers a significant jump in efficiency over the previous generation’s 8nm Ampere process.

Meanwhile, the RTX 4080 will be available in November in two SKUs: a 12GB GDDR6X (192-bit bus) model starting at $899, and a 16GB GDDR6X (256-bit bus) model starting at $1,199. Based on how different the specs are between the two models, it appears that Nvidia is releasing two completely different chipsets under the same “4080” banner; traditionally, such significant Nvidia hardware differentiation has come with separate model names (such as the last-gen 3070 and 3080). We’re waiting for more firm confirmation from Nvidia on whether the 4080 models share the same chipset.

Both new models include iterative updates to Nvidia’s RTX chipset’s signature RT Cores and Tensor Cores. Along with this, Nvidia announced updated processes for both real-time ray tracing processing in 3D graphics and the Deep Learning Super-Sampling (DLSS) scaling system. The former will be augmented on Lovelace GPUs by two new types of hardware units: an “opacity micromap engine” designed to double raw raytracing performance, and a “microgrid engine” to increase geometry coverage “without storage overhead.” on the rendering front.

The latter has now been ported to a new version: DLSS 3, which appears to be an exclusive feature of the RTX 4000 series. According to Huang, this system promises to “generate new frames [of gameplay] without being involved in the game, effectively increasing both CPU and GPU performance.” This real-time frame-by-frame reconstruction of graphics is designed to address issues encountered in image reconstruction methods that do not necessarily model the motion vectors of game elements such as particles . This new method, combined with the methods established in previous generations of DLSS, can be used to reconstruct a whopping 7/8 pixels of a scene, thus reducing the computational demands on both GPUs and CPUs. If it works as promised, DLSS can deliver a significant improvement over the pixel-by-pixel process that has been so successful in both DLSS and its competitors, AMD’s FSR 2.0 and Intel’s upcoming XeSS.

In addition to these proprietary systems, Nvidia’s latest GPUs will apparently rely on a new process that Huang calls “shader execution reordering.” While this will improve performance for raw rasterization, Huang’s brief description of the system is heavily dependent on the computational burden of ray tracing. The system will increase ray tracing performance by 2-3 times compared to the previous generation of Ampere GPUs.

As part of today’s announcements, Nvidia unveiled several titles with upcoming Nvidia RTX-specific optimizations, and perhaps the biggest Microsoft Flight Simulator 2020. Combined with the DLSS 3 image reconstruction system, MSFS was shown at framerates that easily reached 100 seconds in some of the game’s most intense scenes (though a raw rasterization of the same scenes on an unnamed Lovelace GPU and PC also showed strong performance given how power-hungry this game can be and its vast cityscapes ). The gallery above is in 4K, so you can click and zoom in to see how DLSS 3 handles fine pixel detail compared to the obvious combination of raw pixels and standard temporal anti-aliasing (TAA) in older systems.

Huang also tried to gain a foothold in the PC modding scene by showing how a new set of tools developed by Nvidia, dubbed RTX Remix, can be applied to a number of classic games that are open to modding. The best results were demonstrated before and after application Elder Scrolls III: Morrowind, which used tensor cores from RTX GPUs to programmatically update the textures and physical properties of the game’s material. (See above, or go to Nvidia’s site for more before and after comparisons.) Similar results are expected from free Portal 1 The DLC pack that Nvidia will release for fans of classic PC games in November. We’ll be interested to see head-to-head head-to-head comparisons of Nvidia’s auto-modification results versus the best of the community’s more than a decade of development.

Ars Technica may receive compensation for sales linked to this publication affiliate programs.