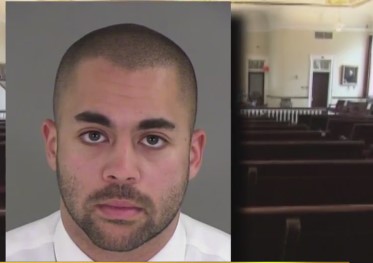 HENRICO COUNTY, Va. (WRIC) — A Henrico police officer is on trial has been charged with first degree murder in connection with the shooting death of a Norfolk man on Interstate 64 in November 2021.

Timothy Grant Million, III., is accused of shooting and killing 53-year-old Tony Elliott Singleton. On November 6, 2021, Million responded to a single vehicle accident along I-64 and east of the Interstate. He shot Singleton “during a struggle” at the scene, police said. but no further details were available.

On Tuesday, January 24, new evidence was presented in court — including footage from Million’s body camera the night of the shooting. The footage shows Million ordering Singleton to put his hands out the window. In response, Singleton is seen getting out of the car and walking toward Million, prompting the officer to shoot him seven times.

During the trial, prosecutors also showed photographs and drawings of Singleton’s gunshot wounds — two of which were determined to be fatal.

Evidence was also presented that Singleton was found with an edged weapon in his waistband.

The jury trial was originally scheduled for October 2022 but was postponed to January 2023. Million is still on paid leave.