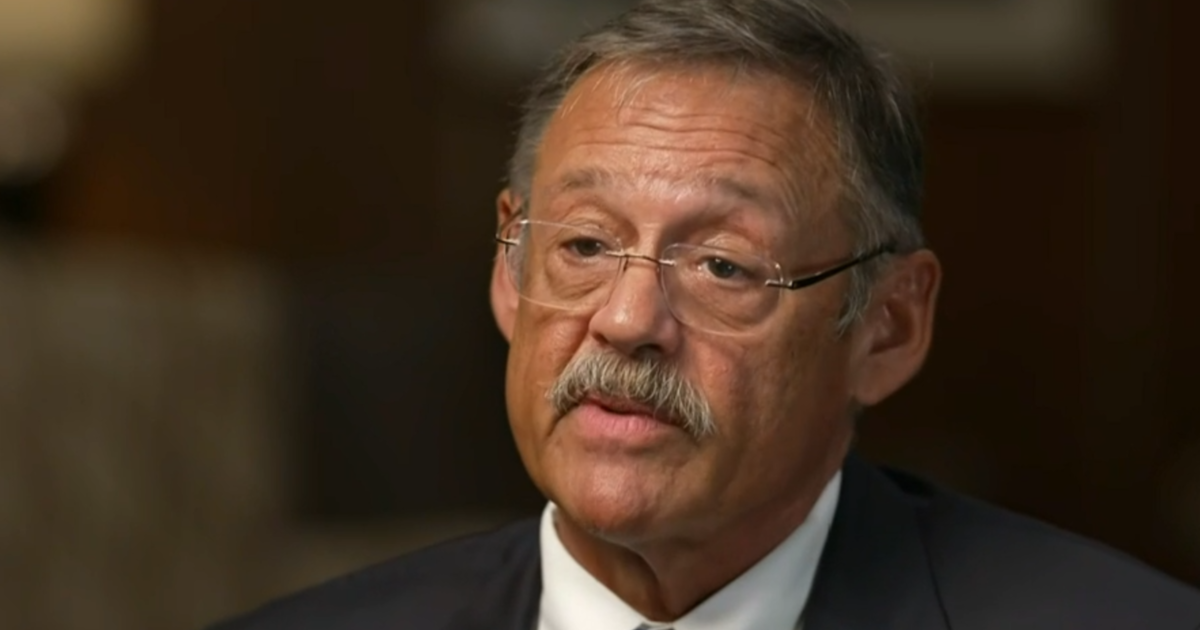 Wearing a Trump pin, Fincham told senior White House official and CBS News political correspondent Ed O’Keefe on Wednesday that he doesn’t know if the election results have changed his concerns about the 2020 presidential election, even though he was elected to office on the same ballot that and Mr. Biden. Mr. Biden won Arizona in 2020, and Trump lost his challenges in the state.

But Fincham accepted Trump’s false claims about massive election fraud. He was among those involved in filing complaints about the 2020 election. Fincham was also on the Capitol grounds on January 6, 2021, and was questioned by a special House committee investigating the attack on the Capitol.

When asked if Mr. Biden had won, Fincham said “probably so.”

“I mean, look at inflation and look at all the things that he owns and that have happened since he came on the scene,” Fincham added.

Many Americans, Finchem said, do not believe the 2020 presidential election was fair. O’Keefe continued to press Fincham, asking if he was saying Mr. Biden was legitimately elected.

“I didn’t say that,” Fincham replied. “He’s the president.”

Finchem, who has served in the Arizona House of Representatives since 2015, said he is running to be the next secretary of state “to make sure we have safe, fair, open and transparent elections.” O’Keefe asked Fincham to define what these things meant.

“Well, you have a selective architecture that we can test for intrusion from outside sources.” Fincham replied. “For example, we know that Wi-Fi and Bluetooth were available at the Maricopa Tab Center. In fact, there was a team monitoring the routers and all the Wi-Fi, and in the middle of this celebration, someone changed the name of one of the pieces of equipment to “F U.” It’s interesting. They knew they were being watched, and this behavior tells me we have some problems.”

O’Keefe asked if that changed the outcome of the election.

“Well, I don’t know that,” said Fincham. “I can’t say one way or the other. But for someone to do something like that, to have that kind of access to a government system that’s supposed to be dedicated to processing election data, it’s very disturbing. That tells me it wasn’t safe.”

Employees of the federal election infrastructure under Trump said in a joint statement in November 2020 that the election was “the safest in American history.” Speaker of the Arizona House of Representatives Rusty Bowerswho lost the August primary for his seat, testified before a House committee investigating the case January 6 attack on the US Capitol that he had been pressured by a Trump ally, the lawyer John Eastman, and Republican Andy Biggs of Arizona to revoke Mr. Biden’s voter certification in Arizona. After the fake voters met in Phoenix and tried to send their results to Washington, Bowers said his office could no longer operate because of the barrage of threats, and Trump supporters also came down to his house.

Finchem testified before a committee of the House of Representatives on January 6 earlier this year. Fincham told CBS News that his Jan. 6 interview with the committee was “much like any witness interview” and he was “treated as a witness, not a suspect.” This interview was the result of a subpoena and took place before his successful primary.

Finchem said he was outside the Capitol on Jan. 6, 2021, “representing my constituents who had some concerns about the irregularities that have been observed” in the 2020 presidential election.

Finchem is running against former Maricopa County Recorder Adrian Fontes, the Democratic nominee for secretary of state. Whoever wins wins will be responsible for overseeing and administering accurate and secure elections as the state’s chief election official.

Fontes is particularly concerned about what might happen if Finchem wins and former President Donald Trump wins the GOP nomination again.

“He may not certify an election that Donald Trump will not win in 2024,” Fontes said.

And in an interview with CBS News, Fontes repeated a phrase he used during the election campaign: “This is not the most important election of our lifetime. This may be the last free election in our lifetime.”

Fontes told CBS News that the challenge will be to continue to spread the truth and show Arizona voters that they can trust the people running their elections.

“However, if we win, the challenge will be to communicate with ordinary Arizonans and help continue to spread the truth, continue to show them that they can trust their fellow voters who are actually running the elections in Arizona. and across the United States,” Fontes said. “In this role, I would be able to help communicate with voters across Arizona about how local elections are run in the counties, how county officials really represent them at the neighborhood level.

Kathryn Watson is a political reporter for CBS News Digital in Washington, DC