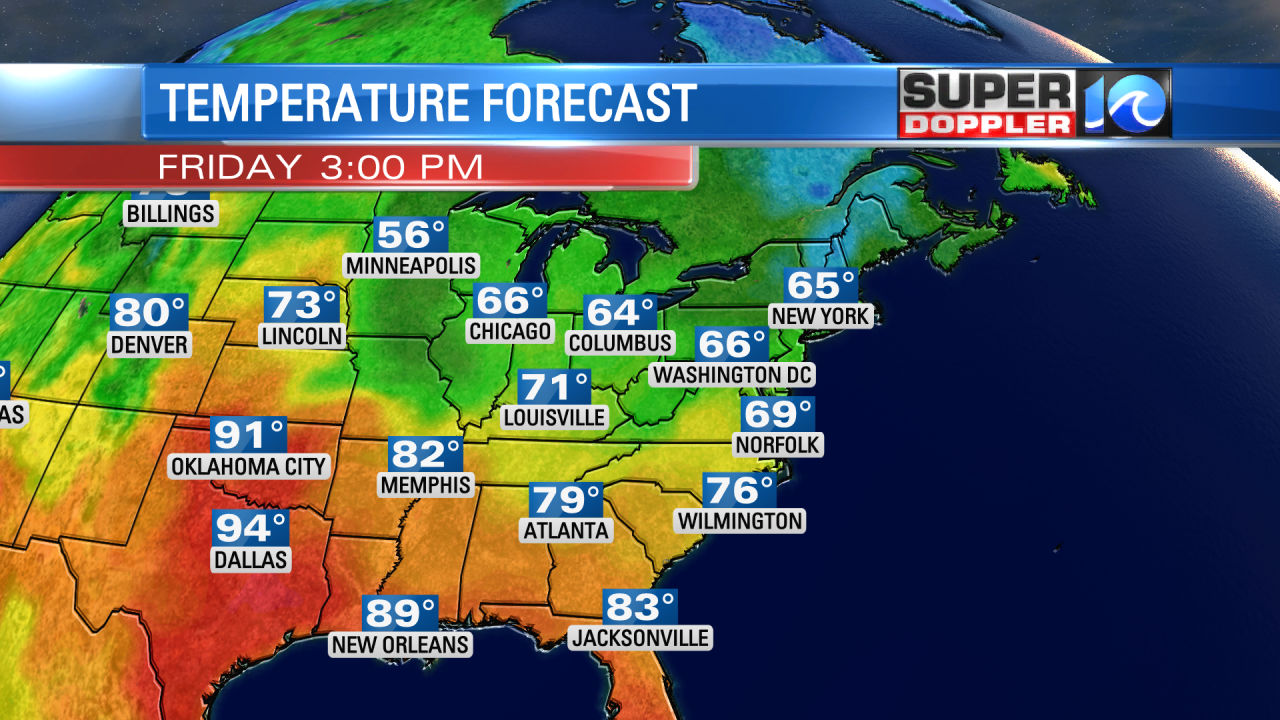 It’s official! Autumn is here! Now you can feel a little less guilty about your pumpkin spice latte. In the last 24 hours we have had a significant change of seasons. Yesterday afternoon the high temperature reached the low-mid 90s.

The heat index was in the mid-90s. Before the arrival of the cold front, it was difficult. When it passed we had a little rain. Unfortunately, it didn’t add much. It was a couple of tenths of an inch at most. Today the front descends to the south of us. Cool/dry air flows in.

Today we will have plenty of sun, but the wind will be strong from the north. It will move at 10-20 mph with gusts up to 30 mph in the metro and onshore. This will keep the temperature low. So, temperatures are expected to be in the 60s to 70s this afternoon.

The wind will die down this afternoon by evening. It must be very beautiful if you like fall weather. Tonight will finally be good football weather for school games and Friday night flying.

It will clear up at night, the wind will decrease. So, low temperatures will drop into the low-mid 50s and into the low 40s inland.

We will have beautiful weather on Saturday! After a cool start, we’ll warm up to 70-70 degrees. We will have a lot of sun. There will be a light westerly wind. It will warm up on Sunday, as the wind will turn a little southerly. We will have partly cloudy skies. By the evening and into the night, short-term rains are possible, but there will be few of them. Isolated showers may continue into Monday, but no dry spells are expected over the next few days. We’ll be back in the 80s on Monday, but will drop back into the low 70s Tuesday through Wednesday.

Meanwhile, it gets even bigger in the tropics. I am tracking 3 tropical systems and a 4th may arrive in the next 24 hours.

We’ve been following the latest news on Hurricane Fiona. We recently talked about the damage she left behind. The center did miss Bermuda, but they were still bumped with some strong wind, heavy rain and high waves.

We also had an impact here. Ocean overflow was previously observed along portions of Highway 12 over the Outer Banks.

Today, all our local beaches have dangerous surf and a high threat of rip currents.

Again, this is mostly from Fiona, but Gaston may have contributed some as well. Fiona will move north of Bermuda today. Then it will move in the direction of the Canadian Seaboard. Bad forecast for Nova Scotia, Canada. Fiona is now forecast to become a major Category 3 hurricane as it makes landfall on the eastern side of the island.

It should slowly weaken within 2-3 days after landfall, continuing to move north.

I won’t say much about Gaston. It brings tropical storm-force winds to the western Azores. However, in the next 12-24 hours, it will move either to the south or to the west. So the wind there should die down soon.

At 5 a.m. this morning, the National Hurricane Center reported that a tropical disturbance in the eastern Caribbean Sea had weakened to Tropical Depression 9. This system will move over the warm waters of the Caribbean Sea through the weekend. The wind shear should lighten up as well. Therefore, TD 9 is forecast to become Tropical Storm Hermine. It is then expected to become a hurricane as it targets western Cuba.

After that, it is expected to move north/northeast and toward Florida

If it stayed on the most likely path (the central line), it would move along the east coast or slightly inland.

Yesterday, models began to acquire a western trend. The European model was more to the east. Since then, the models have made a strong shift to the east.

The GFS model was in a westerly trend yesterday. Now it was swaying to the east.

As you can tell, they are steering the system northeast along the east coast. HOWEVER, there is still a lot of uncertainty so far. This will depend on the large depressions that affect the eastern US over the next 7-8 days. So stay tuned over the weekend.