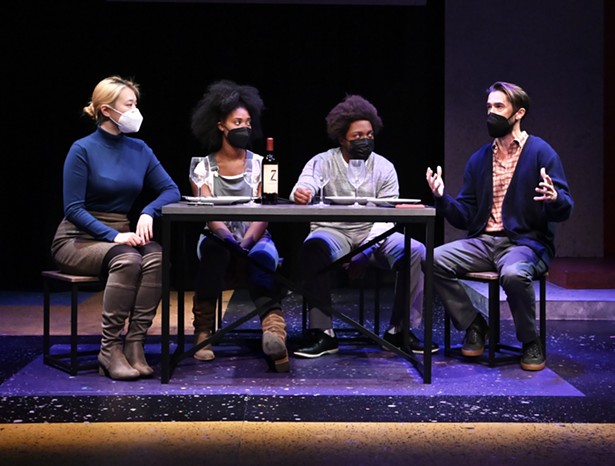 Takes place on the eve of Barack Obama’s election to the White HouseLydia R. Diamond’s drama “Smart People” challenges the idea of ​​a “post-racial” America.

“There’s this mindset: ‘You’ve got Obama. You have LeBron James. You have Tiger Woods. Black people, what’s your problem? This is a post-racial society.” It’s not,” says Chuck Mike, director of the University of Richmond production, which will be staged this week at the Modlin Center for the Arts. “The play prompts the conversation that needs to happen around this issue if we’re ever going to put it past us as a society.”

The show concerns four people from different walks of life and professions who work in and around Harvard University. There is Jackson, an intern surgeon who is often overlooked at work because he is black. There is Valerie, an actress who is frustrated with the roles she is offered or not offered because she is black. There is Ginny, a Harvard psychology professor of Japanese and Chinese descent. And there’s Brian, a neuropsychiatrist who happens to be white and wants to prove that all white people are racist through his research.

Throughout the show, these characters intersect and ricochet off each other, touching on race, class, identity, sexuality, and prejudice.

“It’s a smart, witty and thoughtful black comedy about race,” says Mike, UR’s assistant professor of theater. “It speaks to what I would call another pandemic: racism in America.”

Nia Blondell, who plays Valerie, says the series can make you feel uncomfortable when it touches on difficult topics.

“It’s not much of a plot,” Blondell says. It’s about “race, and how we deal with race, and how race deals with us, and the idea that it’s so much more complicated than any one person can debunk and try to understand.”

As a theater student at Virginia Commonwealth University, Blondell says her character is a lot like her.

“There was a little lightness to my interpretation of the character, and I feel like I don’t have to work as hard as I would in a musical or an older piece,” says Blondell, who starred in the period drama Intimates at VCU earlier this year. . “There are times when I think, ‘Am I playing this character or is this character playing me?’

Robbie Winston, who previously worked as an actor in Los Angeles for 15 years, plays Brian.

“It’s got some intense drama, and it’s got some humor,” Winston says of the series. “It’s funny. It’s sexy. It’s interesting to have these kinds of conversations about politics, race and sex among friends and love interests.”

Although the conversations in the series can be heavy, Winston says the drama is full of humor.

“You walk on eggshells and see these different dynamics, power moves and power plays,” says Winston, who works as a substitute teacher at CE Curtis Elementary School in Chester. “These are conversations that people need to have, but no one wants to, because it ends up creating conflict or destroying relationships.”

All in all, Winston says, “Smart People” is a show you’ll be talking about long after the curtain comes down.

“Come with an open mind and just enjoy the ride. Even though there might be some awkward moments, you’re safe in the audience,” says Winston. “You’ll laugh, you’ll be embarrassed, and you’ll probably be left thinking about things for a couple of weeks.”