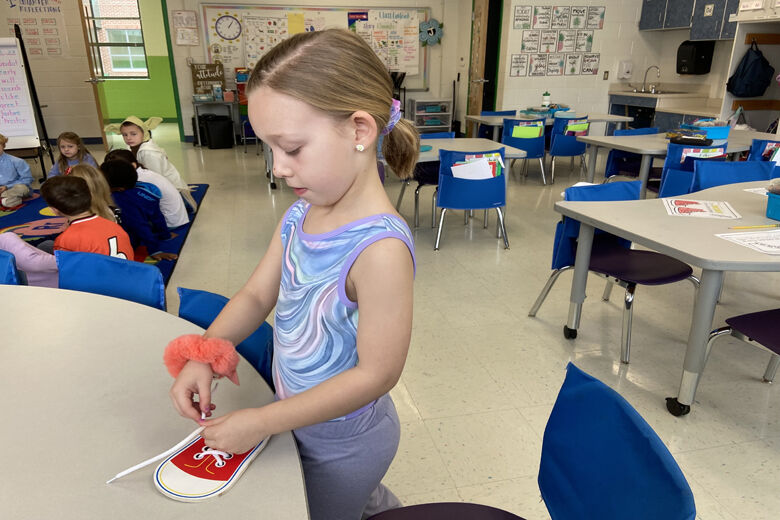 A Fairfax County elementary school teacher, Virginia, has embarked on a task to help students tie their shoes and improve fine motor skills.

In the days before the winter break, first-grade teacher Christine Jarbo and the rest of the first-graders at Stratford Landing Elementary School noticed that during breaks they were asked to tie more shoes than usual.

In the past, Jarbo said she asked students at Fairfax County School, Virginia, to try to tie shoes to gauge their success. Before a pandemic this could be done by several students in a class. But this year, most of Jarbo’s 20 first-graders didn’t even know where to start.

Hoping to speed up the learning curve, Jarbo launched a shoe-tying task, during which students are tested weekly and rewarded with neon shoelaces if they can tie a knot. As the pandemic forced a temporary transition to virtual learning, Jarbo said, students faced some challenges with the use of “fine motor skills”.

“It just came out of necessity. Almost no one knew how to tie shoes on the playground during a break, in a sports school, walking down the hallway, ”Jarbo said. “It was more security – if you can’t tie your shoes, what will it be?”

When the problem began after the winter holidays, Jarbo told parents in weekly notes that students would be encouraged to practice at home and receive classes to improve their skills. Jarboe bought wooden shoes for the students to use them in anticipation of the weekly test.

Every Friday, students have the opportunity to demonstrate their ability to tie shoes. On March 1, the day of the first test, only one student could tie the knot. There were five students in the second week. By the third test there were eight. Now Jarbo has only four students who do not know how to tie shoelaces.

Upon success, students receive a pair of neon laces, which many students have already added to their shoes. Jarbo said the goal was for each student to be able to tie their shoelaces by the end of the school year. The task gained momentum in all classes of the first grade of the school.

Jarbo said the challenge was well received by her parents, and some students told her they planned to go home and practice all weekend.

Porter, a Jarbo class student, said he practiced the skill for two weekends. He said he now likes to tie his shoes – a pair of black Adidas sneakers with black and white laces.

Another student said that her father showed her how to tie shoes and that it took only two days to study. Now she helps her classmates.

“When [the first student] realized the whole class said, “We can do it,” Jarbo said. “It was almost like positive peer pressure.”

After returning to personal learning, Jarbo said, she focused on things like handwriting, letter formation, cutting and line drawing – skills that were less used during the pandemic. But the task of tying shoes was convenient, she said, because returning to class meant “there is no friend who would tie shoes because no one knew how to do it.”

At a time when the task is underway, more and more students have given up velcro shoes and slippers with laces, Jarbo said. Soon she expects them all to boast of neon laces.

“It definitely took off faster than I thought,” Jarbo said.