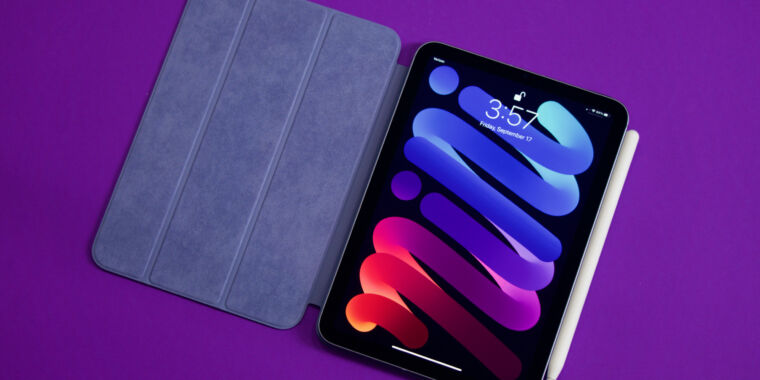 Battery replacement can be fraught with danger, at least for the iPad. Repair shops and experienced DIYers know this, and Apple seems to recognize it, usually giving customers who want a battery replacement a new iPad. Soon, with at least one model in place, Apple and its repairers may start actually replacing the iPad’s battery instead of sending it out for repair.

Report on MacRumors claims that Apple is releasing a new policy for the iPad mini 6 (i.e. iPad mini 2021), allowing repair centers (where devices are brought in for more in-depth service) to only replace the battery, rather than providing a Whole Unit Replacement (WUR) from existing or refurbished stock. MacRumors says that “other iPads may follow in the coming weeks and months,” without being specific.

Replacing the battery on an iPad requires removing the screen, which is difficult on almost all of them. Apple’s proprietary repair tools, one-size-fits-all for each device, can be easier to use than use of manual means at home. But there is an inevitable physical problem with having to apply a strong suction or prying force to a long, wide, and thin display. The sixth generation iPad mini, being the smallest of them all, is probably the device with the highest screen removal success rate.

iPad repairs are so difficult that some non-Apple-licensed repair shops bundle the cost of a screen replacement into their battery replacement quote on larger iPads like the iPad Pro to avoid the tedious process or simply assume a breakdown.

For customers, getting a replacement iPad can sometimes be a bit of a blessing, as scratches, dents or other defects that aren’t obvious at first glance will be fixed by Apple’s supply chain. This goes against the process of restoring a full backup and re-entering dozens or hundreds of apps simply because you need a new battery.

Currently, Apple does not offer iPad repair tools in its Self-service repair shop. Apple typically charges $99, plus tax and about $7 in shipping, to replace an iPad by sending it to a service center. iPad battery replacement while under AppleCare may be covered, but only if the device’s battery health is below 80 percent or other battery problems can be demonstrated.