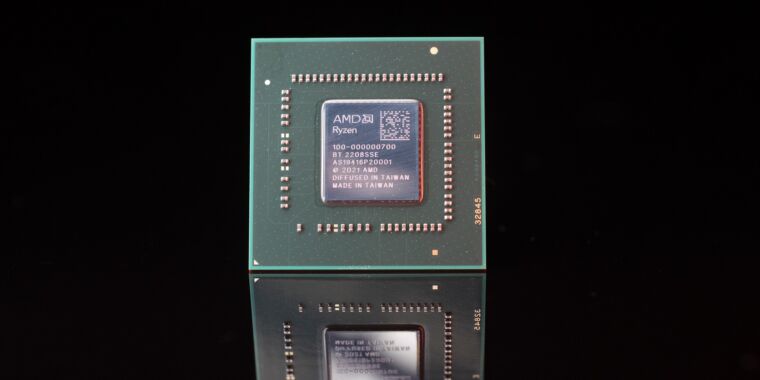 At Computex earlier this year AMD announced a processor called “Mendocino” that was supposed to bring modern technology and 12-hour battery life to notebooks in the uninteresting but important price range of $400 to $700. Today, the company is bringing Mendocino to market as a trio of Athlon and Ryzen processors, collectively known as the 7020 series. AMD says laptops with these Mendocino-based processors will be available from Q4 2022, which is close; launch systems include Lenovo’s IdeaPad 1, Acer’s Aspire 3, and HP’s 17-inch notebook.

The processor in the 7020 series is its least interesting element. It is a quad-core, eight-thread processor (in Ryzen chips; the Athlon chip is dual-core) based on the 2019 Zen 2 architecture previously found in the Ryzen 3000 series desktop processors and the 4000 and 5000 series mobile processors.The Zen 2 processor should be fast enough to make most basic browsers and office applications feel snappy, and will be preferable to Intel’s Pentium and Celeron Silver chips (and probably many of the upcoming Intel processors). But they will be slower than many Ryzen 5000 and 6000 series CPUs, as well as Intel’s quad-core or better 11th generation and higher Core processors.

All 7020 series processors include a new GPU based on AMD’s RDNA2 GPU architecture, which is also present in Radeon RX 6000 series graphics cards, Ryzen 6000 series notebook processors and the upcoming Ryzen 7000 desktop processors. AMD is including four of its graphics computing units (CUs) with each 7020 series processor in a GPU it has dubbed the Radeon 610M. That’s one-third fewer GPU cores than it includes high-end Ryzen 6000 partsbut they should be enough for very light gaming — AMD’s press materials mention 720p gaming in competitive games like League of Legends, CS: GOand DOTA 2.

Depending on the laptop’s port selection, the GPU can also drive up to four displays simultaneously, including the integrated display panel. Like the RDNA2 GPUs, they get the same video encoding and decoding support as higher-end models, including decoding support for the AV1 codec.

Like the Ryzen 6000 processors, these Mendocino chips are built using TSMC’s 6nm process, and they also require LPDDR5 memory – in the near term, requiring more expensive DDR5 memory seems antithetical to budget laptops, but all types of DDR5 RAM should steadily get cheaper over the next a year or two as the number of devices that support it grows and production grows. Processors also include Microsoft Pluto safety equipment.

Mendocino processors are our first focus AMD’s new laptop processor naming scheme in action. The “7” at the beginning of the number simply means that AMD is including it in its 2023 processor lineup, while the “2” in the third number means that it uses the Zen 2 processor architecture. The second number will range from 2 for the low-end dual-core Athlon Gold 7220U to 5 for the quad-core Ryzen 5 7520U, with the quad-core Ryzen 3 7320U in between.