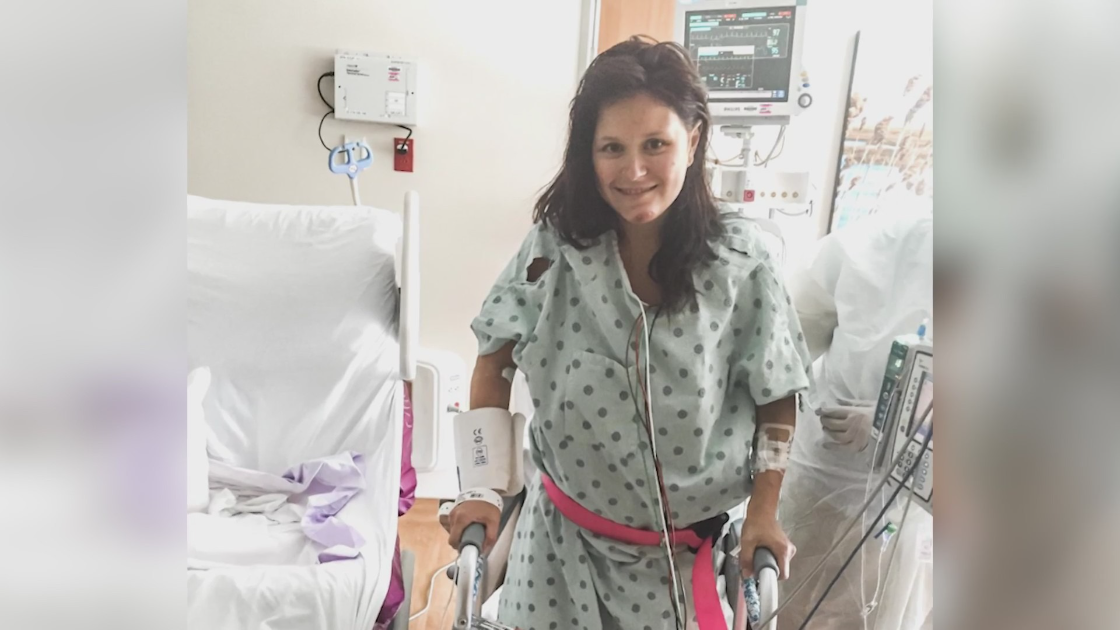 A Virginia Beach mother is saving lives through sepsis education

VIRGINIA BEACH, Va. (WAVY) – A Virginia Beach mother has been given a second chance at life after sepsis threatened to take her away from her husband and children. During this sepsis Awareness Month, she shares how she turned her near-death experience into a new chance at life for others.

“In 2015, I was your average mom, two boys, three and 19 months. My husband traveled all the time. I am very used to being such a single mother, she said Audrey Leishman.

“It started on an ordinary Sunday. I took my kids to the movies and that night we were going to a friends house for dinner. On the way to lunch I started to feel a little sore and (when we) got there I was really cold. I had to ask to borrow a sweater. It was April, so it wasn’t very cold. I couldn’t eat and then on the way home I got worse so I put my kids to bed and lay down I remember I was so cold I started shaking I got up and asked my husband to come and just hold me because I was so cold and he told me I was burning. Looking back on it now, I had chills brought on by a fever, and if I had known that, I would have known that you shouldn’t be shaking with a fever, but I really thought I just had the flu. The next day I started having stomach problems and thought it was the stomach flu. I just need to rest, but it gradually got worse to the point where I had joint pains and then when I finally freaked out, I got a nosebleed.’

Audrey and her golfing husband Mark Leishman, quickly learned that her condition was not the flu.

Related: Mark and Audrey Leishman are providing food and masks to Virginia Beach

“My first clue that things were really bad was that I refused to go to the emergency room at first. I went to Centara’s emergency room and kept trying to say I just wanted to go home. I just needed to rest, and towards the end she said, “You’ve been here for a few hours.” I think you have sepsis. You need to go to the emergency room. You have to go in an ambulance and you have to do it for your children.’ And because she was a mom, and she knew I was a mom, she knew that was one statement I would never argue with. If you tell me that, of course I want to be here for my kids,” Audrey said.

Her problems continued when she went to the emergency room.

“At first they brushed me off and said they would give me fluids and go home. Hospitals have come very, very far. I’m actually surprised that Sentara went to great lengths to improve their sepsis awareness and their protocols, but then there was a very good chance that I would have been sent home if I hadn’t had other advocates with me.”

Audrey was diagnosed shortly after admission.

“Unfortunately, what I thought was the flu turned out to be sepsis, toxic shockand eventually acute respiratory distress syndrome. In total, I was in the hospital for 10 days.”

In accordance with Center for Disease Control, “Sepsis is an extreme reaction of the body to an infection. This is life-threatening medical care. Sepsis happens when an infection you already have causes a chain reaction throughout your body. Infections that lead to sepsis most often start in the lungs, urinary tract, skin, or gastrointestinal tract. Without timely treatment, sepsis can quickly lead to tissue damage, organ failure, and death.”

While Audrey battled sepsis, doctors decided to put her in a medically induced coma for five days.

“I remember very well when they told me they were going to put me in a coma. It was Tuesday night when I was admitted and during the day, Wednesday, I then had respiratory distress. It felt like I was drowning in my own body. I heard a crack in my chest. It got to the point where I had to take a breath between each word. I couldn’t finish the sentence, but I kept fighting it. It was about 5 o’clock on a Thursday morning and they said, “We need to do this right now.” And I asked them for more time. I said, “Can we wait until 7 in the morning so I can call my boys?” I just want to talk to them before it happens.” I think I knew there was a very good chance I wouldn’t wake up, but they kept telling me, “No, we can’t wait.” It has to happen right now.”

Doctors gave Audrey less than a 5% chance of survival, but this Virginia Beach mom beat the odds. However, life after awakening was not easy.

“My family and friends, they went through their nightmare while I slept, but mine started when I woke up. The year after I got sick was full of sickness and lots of antibiotics. My immune system was just destroyed, but the blessing of that year was that I learned so much about sepsis, the toll and impact it has around the world, and realizing that this is exactly why it happened to me. That’s why I got sick, because I could use that experience and turn it into something positive and create a foundation where we can save lives and help survivors, and luckily now I’m at a point where I’m really not I want it to happen, it doesn’t happen. I couldn’t do it because so much good has come out of it.”

This is the “good” that Audrey was talking about “Start Again” Foundation.. It is a non-profit organization that she founded with her husband.

“We want to save as many lives as we can and we want to support families, survivors and communities as they go through their worst moments and crises. For sepsis survivors, this is actually one of the most expensive hospital bills. I’ll never forget when I was discharged, the nurse comes in, I was walking home with the PIC phone and she says, “That’s how much these antibiotics cost.” It’s what home health care is, your bedside table, your walker, all of it. Is this normal? And I immediately thought to myself, what if it wasn’t okay? What if I can’t afford it? And this is really our first program, ours Leishline, started with We’re giving a thousand dollars, and I know it’s not going to fix everything, but if I can take that little bit of pressure off the first, second, third month so they can focus a little more on their recovery and a little less on how they’re going to pay my bills, it means to me that I can do it,” Audrey said.

In addition to helping people financially, the organization is on a mission to educate people about sepsis.

“Knowing the symptoms really is life or death.”

Symptoms of sepsis include:

“Some of the most common causes of sepsis are respiratory infections, UTIs and kidney stones. So, very common things that happen to perfectly healthy people, and you can take a 31-year-old mom who’s perfectly healthy, and four days later I’m 95% dead,” Audrey said.

She also emphasizes the importance of knowing numbers.

According to the Centers for Disease Control:

These statistics don’t sit well with the Leishmans, which is why they hold a major fundraiser each year to continually give more and provide more education through their foundation.

“We have an annual Birdies, Bubbles and Beers Gala and Golf Tournament. We have had it for the past seven years. Our amazing community really grows every year and every year I think we won’t raise more than the last year and somehow every year I’ve been wrong. It’s been incredible, and really amazing that people believe in what we’re doing enough to trust us with their hard-earned money.”

Since 2016, the Start Again Foundation has awarded more than $1,000,000 to support survivors, families, children and communities in need.

“Sepsis is a beast we have to deal with, and we have to be aware of it.”