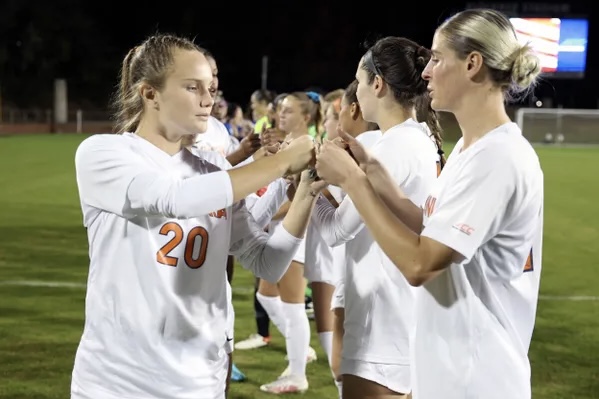 The No. 8 Virginia women’s soccer team lost in the quarterfinals of the ACC Championship on Sunday, losing a 2-1 decision to No. 11 Duke at Kleckner Stadium. Virginia was the fourth team in the tournament and Duke was the fifth.

Duke (12-4-2) struck in the third minute on a left wing attack that started with Maggie Graham finding Kat Rader in transition before Rader quickly fed the ball to Michelle Cooper. Cooper picked up the ball on the way to the box and sent her shot wide of the left post to score.

Virginia (13-3-3) tied the score in the 36th minute on a goal by Alexa Spaanstra. Talia Staude took the ball to the center of the field and found Leah Godfrey near the box, where the junior midfielder redirected the ball past Spaanstra for the finish.

The Blue Devils regained the lead in the 56th minute when Cooper picked up the ball on a turnover and started a counter attack. Cooper found Rader in the left corner of the box and the freshman capitalized on her chance, beating a defender and firing the ball past the back post.

“It was a difficult result. We played very well for long stretches. Give Duke credit for blowing away the chances they got. They punished us for some mistakes we made and that’s what good teams do. We knew it was going to be a very tough game that would come down to playing. We didn’t make enough in our defensive box, and we didn’t make enough in the offensive box. We need to become a little more consistent. Obviously, the first five minutes cause us some problems. It’s not as easy as people think; I wish it was a mentality thing, but there’s a little bit more that goes into it. I have a lot of confidence in the team and we have a whole new season ahead of us; I’m focused on getting better and getting ready for the NCAA Tournament.”

Virginia will now await the announcement of the NCAA Tournament field on Monday, Nov. 7.